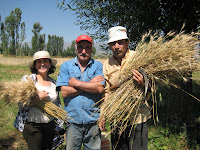 
Note: Due to upcoming personal and professional changes, Yerevan Journal will be taking an extended break, starting again in the future as circumstances permit. Not that I haven’t enjoyed my communication, so to speak, with Armenians and non-Armenians around the world, which I have, but life’s dictates require bringing at least a temporary end to the journal.
Posted by Andranik Michaelian at 2:02 AM

I will miss your posts but I understand how life must take priority over blogging. I hope you can return to us soon as you offer a unique perspective on culture and life in Armenia.