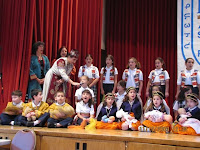 Although many in the Diaspora (as well as in Armenia) are happy to sing and dance the choreographed music that Armenians were forced to perform in Soviet times and for some reason choose to continue to this day, even more are quite anxious to sing and especially dance the true folk dances of Old Armenia. During the course of our stay in the Bay Area of northern California, Hasmik held folk song and dance workshops with Armenians and non-Armenians in Oakland and San Francisco, and in Portland, Oregon. At each workshop/event, one of which followed a dance hantes where Armenians were dancing a combination of Armenian, Turkish, and Greek dances, and not even knowing what they were dancing, the Armenians became truly inspired when Hasmik showed them the steps of real Armenian folk dances. As all the major dance groups in Armenia continue with their choreographed folk dancing, with real folk dancing rarely seen or performed, especially on television, perhaps the Diaspora is the right place for a folk dance (and song) revolution to take place. Time will tell.

Concerning the concerts with Hasmik and the Kitka Women’s Vocal Ensemble of Oakland, California, perhaps the most important outcome was, in my opinion, the bringing back of Komitas to the people; this, in effect, meaning that during Soviet times the songs written or arranged by Komitas became something only for opera singers or huge, professional choirs to perform, and although they performed well, the songs became something other than folk music, Komitas’ music thus no longer sung by the people, who were taught to believe that Komitas music was something only for the elite.

In an amazingly short amount of time, the Kitka singers learned several songs by Komitas and two of his students, Parsegh Ganachian and Mihran Toumajan, not to mention several traditional Armenian lullabies and work songs. They also presented segments from a traditional Armenian wedding, at each concert the person playing the groom chosen from amongst the audience.

The seven-member Kitka ensemble’s performance of Komitas songs was exquisite, both in solos and in choir pieces. By the end of each concert, it was clear that Komitas was returned to the people. And, Armenians and non-Armenians alike were more than pleased with the performances, with Armenians often singing along with familiar pieces such as “Koon Yeghir Balas,” “Shogher Jan,” “Hars em Gnum,” and others.

During our stay in San Francisco, Hasmik also performed at the San Francisco World Music Festival, which included conducting two school assemblies, one for a Chinese immersion school and the other at the Krouzian-Zekarian-Vasbouragan School. At the Armenian school, children were taught and then performed several songs and dances, the youngest in the school singing lullabies, while the older children sang “Ayb, ben, gim” and “Hayr Mer,” the latter written by Komitas in 1915. The children also danced to the music of the “Tashkinaknerov Par” and “Yarkhushta.”

Watching the closing concert of the World Music Festival, in which children and young adults from China, Tibet, Kirghizstan, and the north and south of India proudly performed their traditional music, and did it quite well, I lamented the unfortunate and strange opinion most Armenians today have, that “for our youth to listen to or perform our traditional music, it has to be modernized, synthesized…”
Posted by Andranik Michaelian at 6:27 AM No comments:

An Armenian from a village near Artik, a town about an hour and a half northwest of Yerevan, talked about the recent fund raising for Shushi, in Karabagh:

“I realize the strategic importance of Shushi,” he said, “both historically and militarily. But most don’t know the reason all this money was raised. Recently, rich Armenians started buying land and building homes in and around Shushi. I guarantee you, if this hadn’t happened, the Armenia Fund would have chosen somewhere else. Why not choose Artik? The town is a disaster. But no rich Armenians are going there and building houses. So the town remains in its current bad condition, like a war just hit it. You can’t even drive through the town, the roads are so bad. All this while Shushi gets its new roads and whatever else it needs.

“And the rich won’t care when they let Azeris come back to live in Karabagh. They’ll stay in their palaces, and escape in case things get dangerous.

“Some day the Diaspora will understand this, but no time soon, it seems...”
Posted by Andranik Michaelian at 9:52 PM 1 comment:

Before writing about Hasmik’s recent concerts in San Francisco with the Kitka Ensemble and other cultural activities in the US, a revealing story Hasmik told about an interview she did with Hayrik Mouradian in the mid-1990s:

As co-host of a show simply named “Roots,” broadcast at the time on National (Public) Radio, Hasmik was interviewing Hayrik about his life in Shatakh and escape to Eastern Armenia during the Genocide when Hayrik stated, “I wonder if all Armenians had resisted, fought back, like the Armenians of Van and other places, would Turkey be Turkey today, or would it be Armenia?” After the show, Hasmik received a call from a higher-up from the radio station saying they “shouldn’t talk about such things.” A week later, the show was cancelled.
Posted by Andranik Michaelian at 12:22 AM No comments: